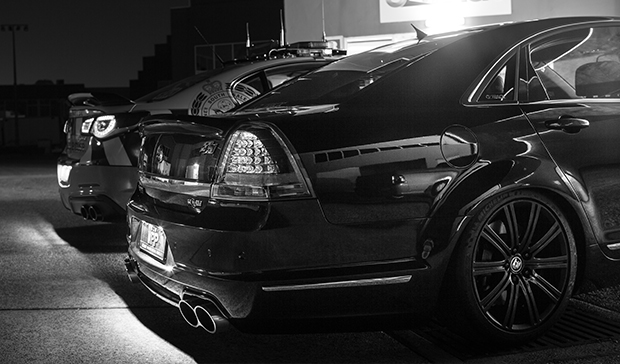 E38 ECM
GM in Australia started using the E38 Engine Computer Module (ECM) in 2005 with the Holden VZ 6L (the HSV 6L 297 used the E40) and then continued to use the E38 ECM in the VE V8s and now the VF V8s.  There are a few different part numbers for the E38 ECM and they aren't interchangeable from year to year. The operating system being used in the E38 ECM has also changed several times and the tune settings are not transferable between the sub-models because of this.  When tuning an E38 equipped engine its best to modify the cars original read file or make sure the right model's file is the starting point before any adjustments are made.

Oztrack started development in the tuning of E38 ECM equipped engines during early 2007 our first car was on the 10th May 2007 which was close to the first day that EFILive released support for tuning the VE. Since then we have tuned over 2000 vehicles with E38 ECMs. On top of tuning for our customers, we also offer a tuning service for workshops worldwide where we assist remotely with the tuning process.

The E38 ECM differs from the LS1 powertrain computer module (PCM) in its complexity which is evident in the difference between the read files. The LS1 computers in VT-VY is about 512Kb to read where the E38 is near 1706Kb and the T43 Transmission module is a separate 1599Kb.  The E38 factory operating systems have a complex equation used to control the fueling and the effects of this equation need to be shaped to control fueling. This makes things more difficult than just adjusting a single table. The ECM is also much faster at processing data than the LS1 PCM and this means that bad tuning can be masked by corrections much more than in an LS1. This can result in other bad effects like flat spots and erratic rpm when coasting slow or decelerating.

The factory settings are able to be improved for better performance and economy.

The fuel economy is improved because when we tune the engine we can get the air-fuel ratios to be more accurate and the timing table values and curve to be much more optimized. Some of this is available because Holden has tried to make the engine capable of using 91 unleaded fuel, this fuel really has too low an octane rating for the engines compression ratio. Its strongly recommended that at least 95 octane fuel is used. There is much more low down torque generated when 98 fuel is used when compared with 91 and this makes the engine use far less fuel on 98 when it is precisely tuned for it.

The responsiveness can be improved because of optimization that can be made with the way the electronic throttle is programmed to open and also how quick the fueling is able to change along with the spark timing advance.

Full power can be optimized because of improvement in timing values, transition and Air Fuel Ratio values that are evident in the exhaust. In our tuning strategies, we have identified over 100 areas of the factory tune calibration that we change.

Do I need a tune?

If you change your air intake you need the engine to be tuned. This is because there are precise airflow limits that are monitored that can put the engine into limp mode which will make your car effectively slow down and stop randomly on the road. These airflow limits are adjusted to be safely above the limp mode activation levels when the engine is tuned. It is unsafe to just fit an air intake and hope for the best regardless of whether its a maf or mafless intake. The intake will also make the car run leaner under load which is bad for the engine and makes the car perform below its potential. Some of these problems will occur straight away or the engine will learn fuel mixtures out of range after a couple of weeks.

If you change your exhaust the rear 02 sensors monitor activity for evidence of catalytic converter failure and will also throw engine lights due to error codes. These error codes are adjusted when the engine is tuned.

Exhaust and Air Intake changes will also make the fueling and timing differences and leave space for the tune to make more of a difference than with a standard car. Even just a catback install should be followed up with a tune.

The standard cars use a mass airflow sensor (MAF), this measures the amount of airflow and then the ECM tries to match this with the right amount of fuel. In the mass-produced automobile market, it works well because more air than normal will be matched with more fuel. To tune a maf is a simple table with airflow on one axis and the fuel value on the other. This makes for simple tuning. The problem is that mafs are not always accurate and cannot tell the difference between a high load situation at low rpm and a low load situation at high rpm, it is possible for both these situations to be equal in airflow and be covered for fueling by the same value which is a bad compromize. The maf can also pick up turbulence and can rapidly oscillate the spark timing advance, this is because indirectly the MAF effects the timing advance values. Tuning without the MAF is much more difficult to do properly because in an E38 equipped engine the fueling is controlled by an equation which needs to be indirectly manipulated so that fueling at all loads and rpms is accurate. But the advantage is with mafless tuning all different loads and rpms are uniquely controlled.  It is very important with mafless tuning that the engine sensors are all healthy and working accurately. The fueling is affected by the intake air temperature sensor, coolant temperature sensor, and manifold pressure sensor.  It is also important that the intake air temperature sensor is reporting true convective air temperature and is not erroneously reporting radiant heat from the air intakes solid parts. The factory intake air temperature (IAT) sensor is located inside the MAF which is right next to a hose to the radiator carrying coolant. This hose often heats up the IAT and makes it report temperatures well above the real induced air temperature.  We have seen IAT temps of 80 degrees on a 25 degrees day. The effect of this error is unstable air-fuel ratios which are usually on the leaner side of being desired.

First sub12s 6L  6 spd auto Commodore in the World NA
On the 21st May, 2008 Paul's car tuned by us did 11.867 and 118.7mph at the Sydney Dragway.  Racing with full exhaust and in street trim all four wheels swapped. The car and driver weighed in at 1780kg on the Sydney Dragway weighbridge.

This car was a 6L L98 running a small cam, imported heads, and tune. This was with the stock stall converter 6 Spd auto. Its best result on the same dyno we use now was 326 rwkw.

Click this link for more information about what we tune