Over The Radiator Intake (OTR) for Commodore & HSV

The LS range of engines in all of the Commodore & HSV since the VT and right up to the VF have restrictive airboxes that hold back the performance. People started making improved intakes for these engines way back with the VT, and many were just pod intakes, and the best ones were shielded pods like the commonly known Growler systems.

Later on some thought of a way to collect air from the grille area and feed it straight over the top of the radiator into the throttle body. Some were even made at home and had no air filters, and at the drags, these instantly proved to be successful. Back in 2004, we tried one of these homemade "just for use at the strip" intakes. It didn't even have an air filter. The gains at the strip were a solid 0.5s in our LS1 compared to the stock airbox with a K&N Filter. We then knew that an intake like this with a good filter would be a success.

Engines make more power dependent on the amount of oxygen in the air that makes it to the intake valve and into the cylinders. In a naturally aspirated engine, induction is dependent on the air pressure at the location. Forced Induction is where the air is forced into the intake valve. Using an engine at high altitude, the engine will experience lower atmospheric pressure and will make less power due to there being less air density and therefore less oxygen for the explosions in the cylinders. Air pressure also varies at the same altitude as the weather changes, and that means some days an engine will make more power. The average pressure at sea level is 101.325Kpa and 1.2 kPa for every 100 meters. There are days when at sea level the air pressure can rise higher than 104.0Kpa and during storms can go well below 99.0Kpa. The higher the percentage of the air pressure making it into the engine at high load high rpm the better. This is dependent on the design of the cold air intake, better-shaped intakes that allow the air to reach the throttle body via a more direct path and can collect the air from a large input area will work the best at maximizing pressure. The only way they can be let down is the air filter when the shape is good.

What happens regarding air pressure on VT-VF Commodores and HSV?

The pressure in the engine at full throttle in a naturally aspirated will never be above the air pressure at that location at that time, the only way this would ever be possible is if the air intake can provide a "ram" effect on the air flow. A ram effect is never going to happen in the real world while using an air filter in the intake. There is a pressure sensor located in the intake manifold called a "Manifold Absolute Pressure" (MAP) sensor, and it is a critical component used when accurately tuning. At idle the map sensor may say as low as 30 Kpa but at full throttle, at low rpm, it records the air pressure at that time so might be 101Kpa. However, with the stock airbox and filter, this may fade undesirably to as low as 89Kpa, which would be evidence of 12kpa of restriction in the intake system and is a significant loss of potential power. With a sound OTR system that uses a high technology filter this drop may be as small as 0.5Kpa so the MAP sensor reading may drop only as low a 100.5kpa on a 101.0Kpa day. Usually an air filter even a good one like a K&N design will cause a drop of around 1.0Kpa at very high rpm. In terms of power, 1Kpa may only represent a loss of about two rwkw, but a 12Kpa drop would likely lose around 24 rwkw based on the same calculation method. The main thing aimed for is to retain as high a percentage as possible of the currently available air pressure.

What are the benefits of a cold air intake? 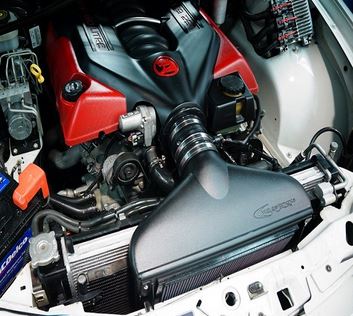 Colder air is denser than warm air and put in simple terms the mathematics suggests that for every degree of change in air temperature at the intake valve there is a gain or loss of about one rwkw. Unshielded pod filters do not work. They induce air that is preheated by the exhaust manifolds, and it can easily be 10-20 degrees hotter than the outside air temperature. The extra heat in the air could easily cause a loss of power of 10-20 rwkw. The ideal temperature at the intake valve is the same as the ambient (outside) temperature, but this goal is unrealistic since the air temperature will increase as it enters the intake manifold. However, variations in ambient temperature are matched by a very similar amount inside the intake manifold. The Intake Air Temperature (IAT) sensor in modern EFI equipped engines helps the air-fuel ratios stay precisely where we want them even though weather conditions change. On a super hot day, the air is less dense and less fuel needs to be injected to create the same ideal air-fuel ratio. Alternatively, on a cold day, the air is thicker and more fuel is injected to match the increased oxygen levels. A more powerful engine is the result of these conditions. You have most likely noticed how much faster your car is on a cold night. Its this type of benefit that a proper OTR Cold Air Intake can give you all the time.

What about heat soak?

Hot objects near the intake and its piping really have a minimal effect on the temperature of the air that is flowing. This is because more time is needed for a hot object to transfer its heat to fast moving air molecules for the heat to impact on the air temperature of the molecules that reach the intake valve. However, the heat soak can have a massive effect on the intake air temperature sensors reported temperature and this can, in turn, have a negative impact on the performance of the vehicle. It is best to have the Intake Air Temperature (IAT) sensor located in a location that gives it the best chance of recording the temperature of the air inside the intake which is due to the high speed of the induced air very similar to the ambient air temperature. So the best location to mount the IAT sensor is outside of the engine bay so that it measures ambient temperature, just try to put it somewhere away from water as this will cause the sensor to rust and eventually it will stop working. If your OTR is using a maf on a late model car then it will most likely be using the IAT sensor that is inside the maf, this is OK, but often it will report a far higher temperature than ambient especially after the car is parked. This isn't a big problem as long as it is accounted for. If you are racing at the drags and want the best performance immediately after idling the car in the staging lanes this position if the IAT sensor may hold the car back in performance, also, heavy traffic will overheat the sensor as well and reduce performance. These errors in reporting can be accounted for in the tune if the tuner is aware of the normal range of temperatures being reported and the negative effects reduced. What are average gains from a good OTR?

Combined with a tune to suit we have consistently seen 30 rwkw or more from HSV LS3 using factory exhaust and similar in L77/L76/L98/LS2. LS1s are similar but vary in performance much more with the different models.

They make a great sound, and on a stock car they make it sound like you just fitted a nice exhaust when you have the throttle wide open, yet the car is still quiet when cruising. For many people a custom tune and an OTR Cold Air Intake is their only modification to their vehicle, they are satisfied with the gains and the sound.

What difference does having a maf in the OTR make to performance?

It makes next to no difference in maximum power compared to a mafless tune. However, there are benefits of tuning the car not using a maf as long as it is done correctly which is much more involved and harder to develop for the tuner. The advantage is that fuelling can be more accurately setup at all rpm and load. This gives better fuel economy and can reduce popping during deceleration if you want less of it.  Many people also comment that the power delivery is smoother when not using a maf and this is because of smoother timing advance transitions due to the mafless tuning calculations, rather than the effects of turbulence measured by the maf. Tunes not using the maf can be done even with the maf still in place, and the advantages are always there when this is done, removing the maf does not give any further gains in this situation as long as the screen is removed from the maf.

What OTRs do you recommend?

We recommend OTR Cold Air Intakes that have an ease of filter removal for cleaning and ones that last well.

We also post OTRs and remotely tune them all the info is here.

Click this link for more information about what makes/models we tune & current pricing.