LS1 Tuning Explained - Why do they gain so much from Tuning?

The LS1 is a high-performance engine and there are two main reasons why they can be made to perform so much better:

1. The fueling accuracy is much better at all loads if a mafless tune is done properly than can ever be provided by a maf tune (see MAF section below). By properly I mean all loads are adjusted to be accurate. This is also dependent on the 02s sensors being in good working order.  The oxygen sensors are able to detect when at anything less than full load whether the air-fuel ratios are near 14.63:1 and adjust the fueling coming from the fuel injectors to pull the AFRs closer to 14.63. However, if the O2 sensor trimming system is having to make big corrections because the main fueling is out then this results in the car's engine not running as smoothly and it will also use more fuel because it is less efficient. If the fueling is accurately shaped and adjusted then the 02 sensor trimming system has less adjustment to do and they can even be even turned off to allow leaner cruising mixtures to improve fuel economy.  The tuners challenge is that air-fuel mixtures vary with variations in air temperature, coolant temperature, and air pressure.  With old engines running carburetors they run richer when the air is hotter this is because there is less oxygen in hot air and the carburetor's jets will always supply the same amount of fuel because there is no correction available. In this modern injected LS1s they should be able to adjust and compensate for variations in weather conditions accurately and always give accurate air-fuel mixtures even when at full throttle.  Oztrack had vast experience in Super Street bracket drag racing in 2004-2010 and in 2006 Steve the founder of Oztrack won the  NSW Season Championships, an achievement which is based more on the consistency of performance race after race than outright speed (although the car at that stage at modest specs and was running near 11.8s ET). Much of this achievement was made possible because of the modern computer engine management that is available for standard engine management systems in the LS1s. There is an operating system upgrade available for LS1s that improves upon the factory programming, it has extra tables that help take control of what happens to the Air Fuel Ratios as weather conditions change.  It also offers the ability to precisely control fueling in boosted engines and even offers throttle percentage based fueling which is useful in engines using 8 throttle bodies etc. To win the season champs in Super Street also involved Steve determining precisely the best values to be used in the correction tables because the tables do not exist in the factory programming. This was done based on many hours of logging and experimenting with sensor positioning etc. The data from the research required for our race performances have been implemented in all of the LS1s we have tuned.

2. The spark timing curves need to be effective and right for the primary fuel octane being used. The factory settings on all the models left so much room for improvement. You will see this is obvious from the images below. Many people over the years have suggested that Holden held the Commodore LS1s back to allow easy improvement over the years the LS1 was used. This started with the VT in 1999 through the VX, VU, WH and to the VY WK and finally the VZ LS1. Here are the upper timing tables various standard Australian LS1s I have outlined the area that is most important at WOT in stock cars

Below is the upper spark timing table of a VX SS. It has a peak in the middle of it which is a problem and also low timing advance at low rpm and also at high rpm. 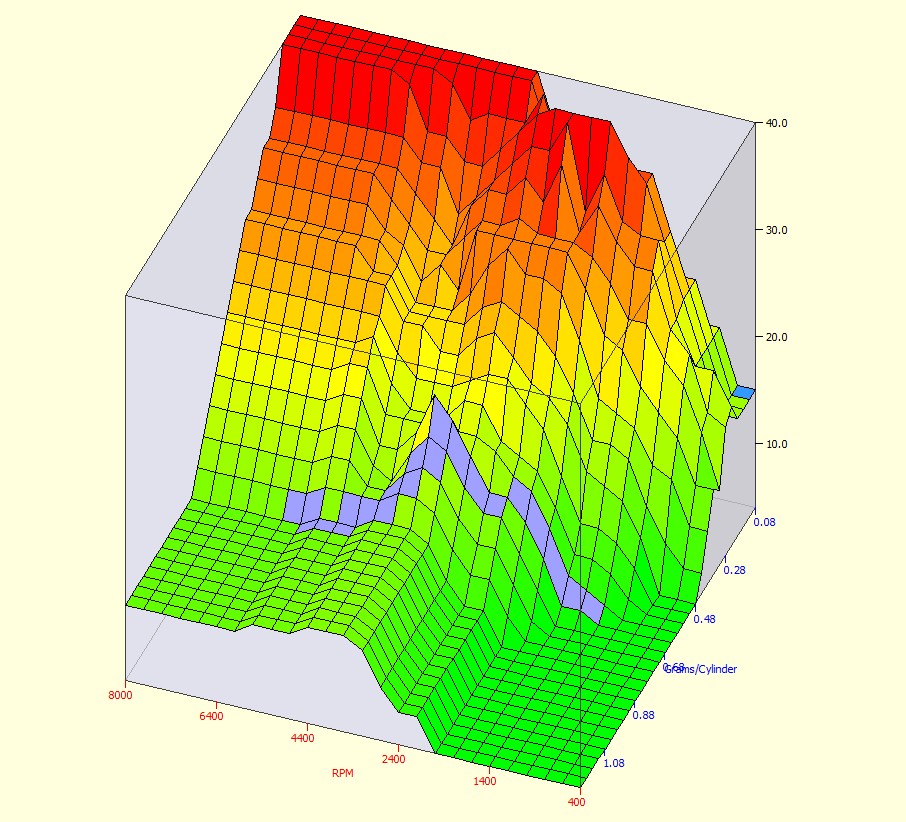 Below is a VX HSV 255kw upper timing table. It is messy and has low timing advance at low rpm with a mountain chopped out of it at low rpm. 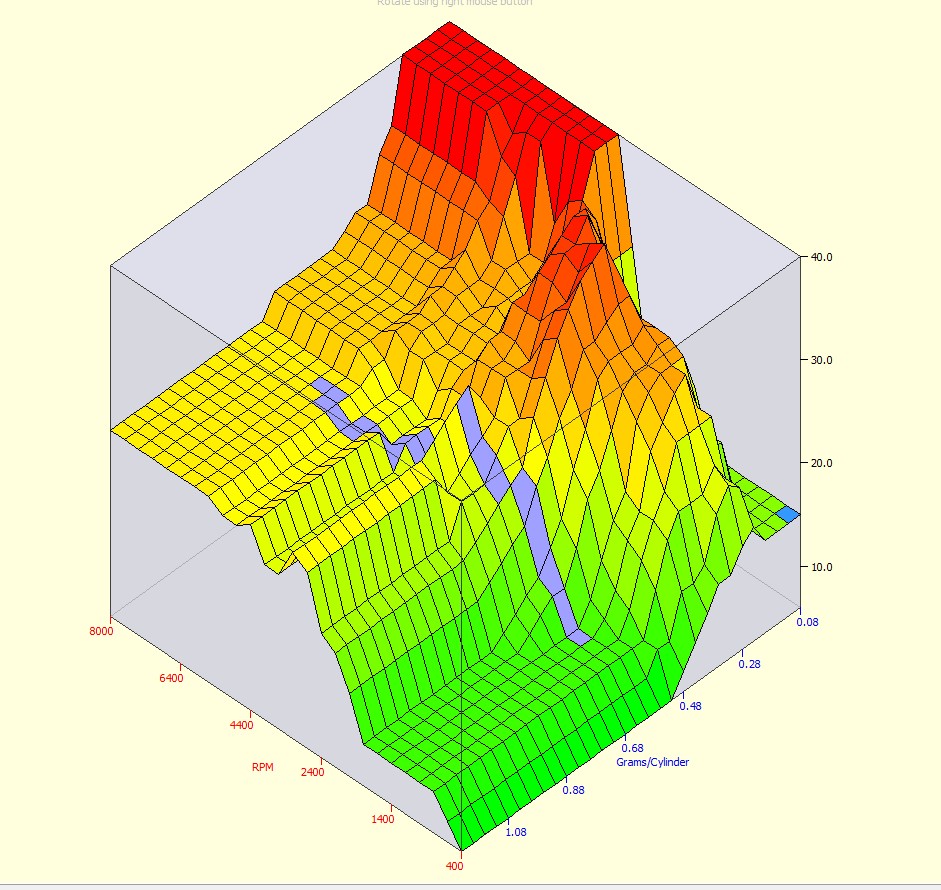 Below is a VY Series II HSV 285 upper timing table. It looks like a theoretical timing table with no evidence of customizing the values across the loads and rpm. It has too much timing advance in the mid-range and every HSV 285 lives on its lower table because of this. 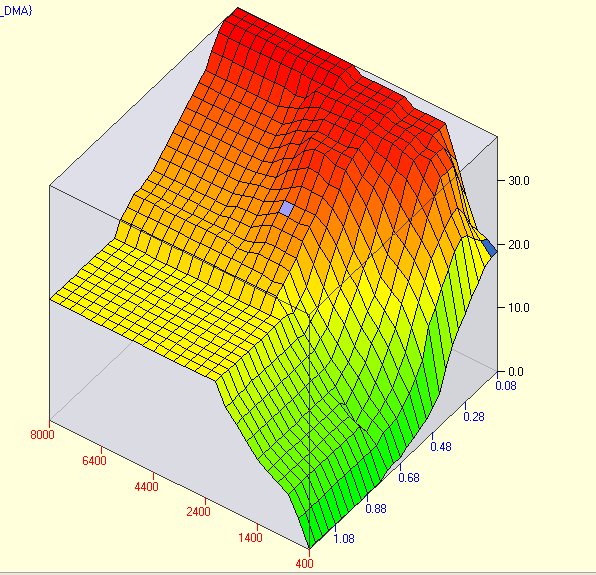 The timing tables that we use at Oztrack have much better smoother shapes than the factory timing tables but are much more developed in the real world that is evident in the VY 285 table. We have developed them from many hundreds of cars tuned on the dyno and tested at the drag strip.  Good timing tables have the right curve at the right rpm and need to be shaped across the loads and also as rpm increases.  Having too much spark timing advance will reduce power and having not enough will leave power and torque available.  The right amount of timing at any load and rpm is dependent on what the engine "likes" not what the tuner theoretically prefers.

We have followed on from our thorough approach used with LS1s into the newer models. The E38 Engine Computer Module (ECM) is faster and its operating system has much more complex fueling equations, many corrections using the electronic throttle, spark timing, etc.

Mass Air Flow Meters - How good are they?

Mass airflow meters are able to measure airflow. This information is sent to the engine management system and it is able to arrange a precise amount of fuel be injected for that airflow. The problem is that there are many situations where airflow is the same even though the loads and RPMs can be very different. For example 2000rpm at a high load and 3000rpm at low load can have the same airflow. This can cause variations in AFR ratio between the two situations, and these will result in inferior fuel economy, more popping on backoff and less smoothness as the car accelerates at any load relative to a mafless tune that is done properly with all the correction factors adjusted precisely. The maf also picks up some turbulence and this creates some very rapid variations in the airflow values it provides the ECM and this results in undesirable variations in spark timing advance.

The Power Gain from Tuning

The power gained from tuning is partly due to a typical LS1 being far too rich at full load, as soon as they are leaned out the right amount within safe limits the power increases. It increases further when the spark timing advance is increased the right amount.  A common gain in many LS1s is near 60 rear wheel kw from a tune, over the radiator style cold air intake (as long as it has a good flowing filter and doesn't allow warm air to be induced) and accompanied by a full exhaust including good extractors and metal high flow cats as well as good free flowing catback system.  The end result is cars that can make near 250 rwkw which is over 300 engine kw.  The total gain to get to that value depends on where they start. The lowest values standard are usually some of the older utes and highest standard numbers are the HSVs (but they still notice a solid difference). The VZ Holden Commodores gain the least of all the standard non-HSVs but they also often make the largest numbers may be due to the larger throttle body and maybe even a possibly different stock cam.

Cars that are tuned alone all gain quite a bit but perform very well when just accompanied by an over radiator intake (OTR), we often see gains of 30 rwkw from this combo alone and sometimes more.

Some old cars make a good number by accident untuned but the result is being caused by failing fuel pumps lowering the fuel pressure and have leaner air-fuel ratios as result, but these cars will eventually get too lean and end with problems.

The best performing engines are often old even blowing blue smoke and have been thrashed all their lives. The lowest results are usually cars that are babied all their life and are relatively low km still. Near new engines always make low numbers.

The LS1 engine often improves around 15% in fuel economy. This is due to better spark timing and air-fuel mixture accuracy creating greater torque. This means the driver needs to use less throttle to accelerate or climb hills and can also use lower rpm more often due to the engine sounding and feeling more comfortable at low rpm, which is especially the case in 6th gear or top gear in automatics. The exhaust and good air intake help this as well.  Aftermarket underdriven balancer kits also improve fuel economy in LS1 engine due to less drag that is placed on the engine by the accessories. They have to spin slower after the underdrive kit is fitted at any engine rpm.

One Tip not to forget about LS1 engines

In Australia, the LS1 started being used in late 1999, which means many of the cars with this engine are now over 10 years old. The common occurrence now is for these cars to have had multiple owners and fading service history. The fuel injectors in the majority of them are still original and have never been replaced or have ever been cleaned. It is likely that the injectors will be flowing differently when compared to each other from cylinder to cylinder. This will cause increases in fuel usage, extra pinging on the lean cylinders and potentially even engine damage. Evidence of unbalanced injectors may be apparent in a slightly unsteady idle. Sourcing a new set of injectors may give the aging engine a big boost in overall performance. They are part number 12561462 (Bosch # 0 280 155 931)

On a similar note the catalytic converters may also be original which will mean at 10 years old they will be very low flowing and holding the engine performance back, making it run hot, etc.  It is common in recent years for cars to be found with cats that have collapsed and an LS1 engine severely held back in its performance.

So in summary, we believe every LS1 engine should be tuned with a good over radiator cold air intake, have new injectors, high flow cats at the very least. This will give the owner a car with great performance and incredible fuel economy for its kind. We have known of cars to average near 8.0L/100km from Sydney to Melbourne.

Please share this article on the internet with reference to our site. Feedback and other supplementary ideas are invited.

Click this link for more information about what makes and models we tune, as well as current pricing.